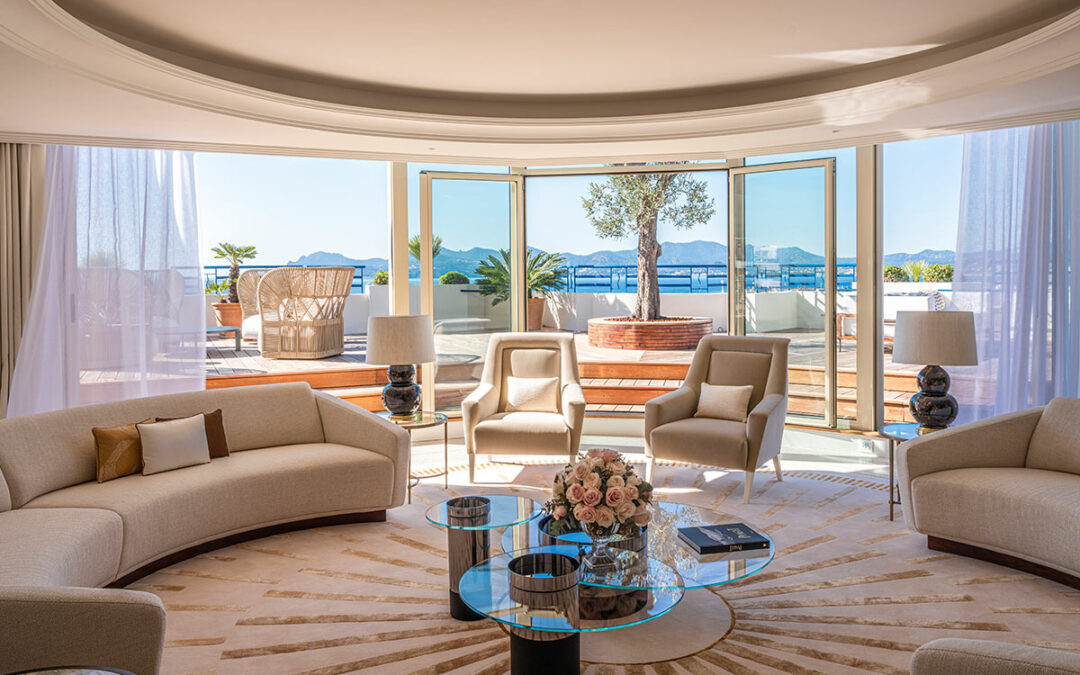 The legendary Cannes hotel continues to maintain its legend.

It is a name that makes you dream. The Hôtel Martinez instantly evokes the French Riviera, the Cannes Film Festival, the Roaring Twenties… Despite its 93 years, this beautiful stone vessel has lost none of its beauty and knows how to keep its good looks. Thus, in spring 2018, the hotel gave itself a nice facelift after a year and a half of renovations led by the architect and decorator Pierre-Yves Rochon (who had already designed the first plans for the restaurant La Palme d’Or). 2018 is an important year in the history of the hotel, which has joined The Unbound Collection by Hyatt, a brand that includes other prestigious hotels such as the Hôtel du Louvre in Paris and Les Manoirs des Portes in Deauville.
In figures, the Hôtel Martinez has 410 rooms and suites, 3 restaurants, a bar, all on 40,000 m2 where luxury and Riviera-style living are two fundamental values. The aura of Isabelle Huppert floats on the seventh floor with a suite designed for the French actress, where white meets touches of cream and gold. A glamorous setting to be found next to the Thierry Frémaux suite. Like the star of The Pianist, the General Delegate of the Cannes Festival also has his own dedicated space, designed as a masculine boudoir with a graphic design dominated by black and midnight blue.
In terms of gastronomy, the Hôtel Martinez is also playing in the big league with La Palme d’Or, a two-starred restaurant that hosts the menu for the first dinner of the members of the Festival jury every year. Behind the stoves, chef Christian Sinicropi (also the supervisor of the Martinez restaurants Le Jardin and La Plage and of the Martinez Bar menu) has the difficult task of delighting the taste buds of the personalities of the seventh art. Majestic, the palace welcomed in November a new general manager, Michel Cottray. With him, a new page is being written in the beautiful and brilliant history of the Hôtel Martinez.

When the Hôtel Martinez and the Carrita beauty house join forces, the result is L’Oasis Spa by Carita. Luxury and relaxation meet in this space, which includes 7 treatment rooms for signature rituals (including 2 VIP rooms for duo treatments). Whether you prefer hammam, massages or halotherapy (salt-based treatments), all you have to do is relax!