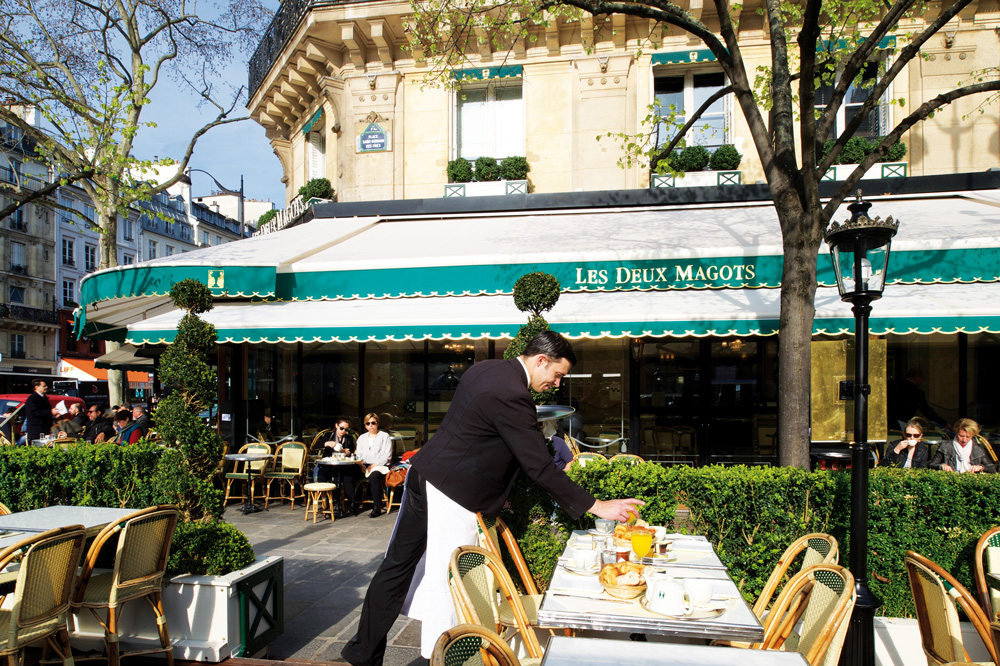 Whether on a blank page or a blank canvas, for over a century all the artistic movements that changed our view of the world were born here in this legendary café.

When the Saint-Germain Jazz Festival on May 21st sets double basses and saxophones humming underneath the most famous church tower in Paris, no doubt the ghosts of the 1930’s will return to shimmy and shake to the crazy ragtime rhythms. We wouldn’t be surprised to glimpse a shadow of Sartre or Boris Vian, back to celebrate the music to which they contributed so much. They’re at home in Saint-Germain, and nowhere more than the court of artistic royalty, the Deux Magots. Imagine them on the rattan chairs, leaning against the front window or lingering on the terrace, lovingly recreated and adorned each summer by president Catherine Mathivat. All the greats of literature from the 1930s through 1960s had their favorite spot here. For it was here, under the watchful eye of those legendary Chinese statues that the surrealist movement was born. Enter the electric Antonin Artaud, here’s Aragon dreaming of Elsa and there goes Eluard and his ‟ automatic writing ” … It was at this café that Andre Breton launched the cultural revolution that would take the whole world by storm. In less than a decade, artists from all over Europe were heading to Les Deux Magots to meet the revolutionary avant-garde of literature. What would have become of the paintings of Picasso or the sculptures of Giacometti if their creators hadn’t crossed paths with those exceptional characters Breton or Sartre? After the war the legendary couple that was Sartre & Beauvoir wrote a new page in the history of ideas at the Deux Magots, and the impact of existentialism still resonates today. If you’d like to see for yourself, an exhibition by painter Eva Pelles devoted to the period will adorn the walls of this mythical Saint-Germain café for the whole of May. And for June 16th’s famous father-daughter lunch you may well encounter some present day celebrities or well-known businessmen, catch a glimpse of Stefan Zweig, notebook in hand… or perhaps even James Joyce who, like Balzac’s Rastignac, once sat on this terrace and wagered he’d shake literature to its core.
The bet was won.
The future of art is still being written at the Deux Magots.